Ontario Securities Commission (OSC) staff recently reviewed a sample of issuers to assess their compliance with the provisions relating to an auditor’s involvement with interim financial reports as set out in subsection 4.3(3) of National Instrument 51-102 Continuous Disclosure Obligations (NI 51-102). While NI 51-102 does not require an issuer to engage its auditor to review its interim financial report, it does however require an issuer to disclose in an accompanying notice if an interim review has not been performed by its auditor. We found a significant level of non-compliance with this disclosure requirement and in these cases, issuers were requested to refile their interim financial statements with the required disclosure.

The purpose of this notice is to summarize the results of our review and to clarify the securities law requirements relating to an auditor’s involvement with interim financial reports. As well, we have provided further guidance on the review requirements for an issuer’s first interim financial report prepared following its transition to International Financial Reporting Standards (IFRS). Issuers and their advisors should take this notice into account when assessing the extent to which future disclosure meets the requirements of securities legislation and their investors’ need for transparent disclosure. Investors need to be properly informed about an auditor’s level of involvement with an issuer’s interim financial report given that auditor involvement levels will continue to vary amongst issuers.

We reviewed a sample of 72 issuers, comprised of 28 non-venture and 44 venture issuers, where it appeared that the interim financial statements had been reviewed 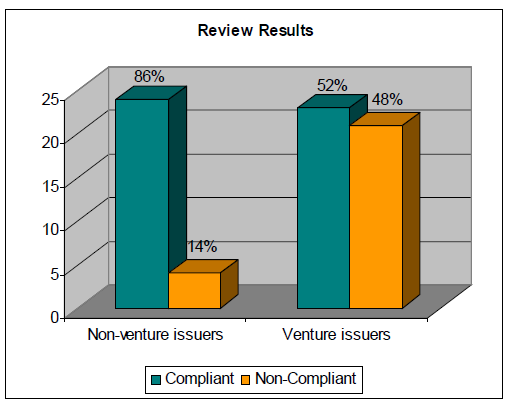 An issuer is not required to engage its auditor to review its interim financial report for the purposes of fulfilling its continuous disclosure obligations under NI 51-102. As depicted in the chart below however, subsection 4.3(3) of NI 51-102 requires a reporting issuer to disclose if an auditor has not performed a review of the interim financial report, to disclose if an auditor was unable to complete a review and why, and to file a written report from the auditor if the auditor has performed a review and expressed a reservation in the auditor’s interim review report.

As the white box in the chart shows, the only time that disclosure is not required is when an auditor has performed a review and has not expressed a reservation in the auditor’s interim review report. The term “review” refers to a review engagement where the auditor reports to the issuer’s audit committee on the results of a review of the issuer’s interim financial report for all of the periods presented in the report and in accordance with Section 7050 of the Handbook. (If a reporting issuer’s financial statements are audited in accordance with auditing standards other than Canadian generally accepted auditing standards, the corresponding review standards should be applied.) Where an auditor has been retained to perform limited review procedures or to review only certain components of an issuer’s interim financial report, this would not constitute a “review” and we would require disclosure of a notice indicating that the interim financial report has not been reviewed by the auditor. While NI 51-102 does not prescribe the format of this notice, issuers typically provide this disclosure on a separate page appearing immediately before the interim financial report.

Lexata’s database should be used for reference purposes, not legal advice related to specific fact scenarios. As indicated in the menu of topics and search results, this website covers financial statements; non-GAAP financial measures; insider reporting; early warning reporting; exemptions from the takeover bid rules; proposed ESG disclosure rules; investment funds; definitions relating to these topics; and AGM deadlines. Please contact us with any questions about the coverage of this website and future topic additions.

Please see our Privacy Policy for information on the data we collect from customers and how we use and protect that data.

© Queen’s Printer in respect of Ontario laws and rules on Lexata’s website. They have been reproduced with care but are not the official versions as set forth in The Legislation Act, 2006.